The best part about finishing up a modular asset set is creating something with it.

But even if you didn't create an asset set yourself, its good practice to spend a few hours with that set and familiarize yourself with it.

I decided to use "Modular Pipes" together with "The Corridor Project" assets that I created couple of years ago.

Here is how to use two different asset sets together within one scene and construct something interesting.

Second part of this tutorial series is here: UE4 How to Make Modular Pipes Work in "The Corridor Project"

Open up project folder for new UE4 project, the one you are working on and one you want to place older assets into: 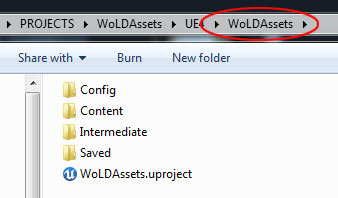 Open older projects where the assets you want are in. In my case, I had to open two projects. One for "Modular Pipes": 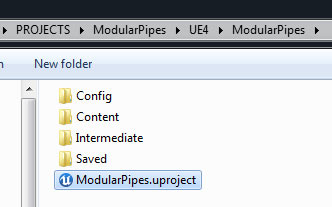 One for "Corridor Project": 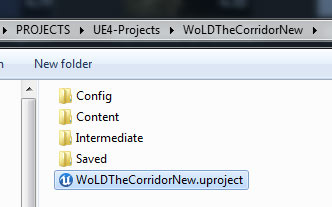 You can use "Show in Folder" option from the "Epic Games Launcher" to jump right into the project folder directory: 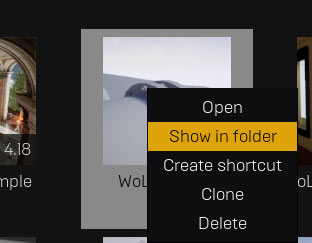 Copy the folders that contain your assets from these projects and paste them into the Content folder of new UE4 Project, maintaining the same folder structure.

From inside the Content folder I copied the following folders into new UE4 project: 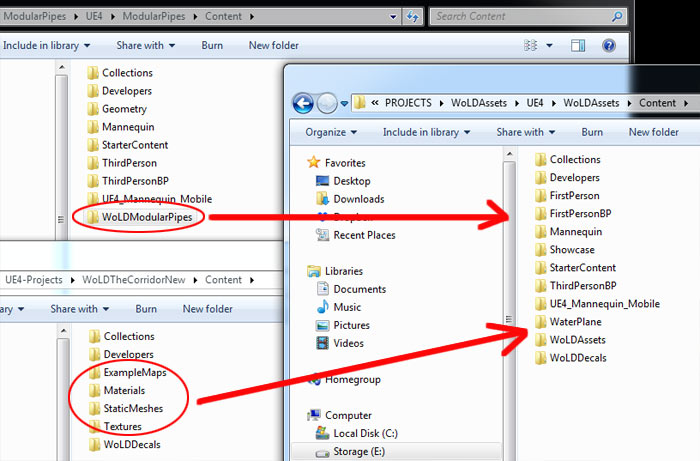 I had "The Corridor Project" assets within 4 different folders - Example Maps, Materials, StaticMeshes and Textures:

I want to place these 4 folders into one main "Corridor" folder for better organization. But this should NOT be done outside UE4. 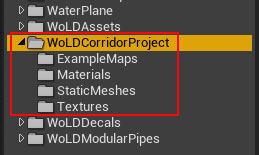 I updated the default level with additional actors to make it workable. I updated the Sky Light to Stationary, inserted Lightmass Importance Volume, expanded the ground plane and inserted a Mannequin for scale.

See how all of this was done in this tutorial: 8-Step Checklist for Level Scene Setup to Begin Working.

I didn't have an idea what I wanted to create. So I began inserting few meshes into the scene to get something going.

I inserted the walls, columns and a few pipes: 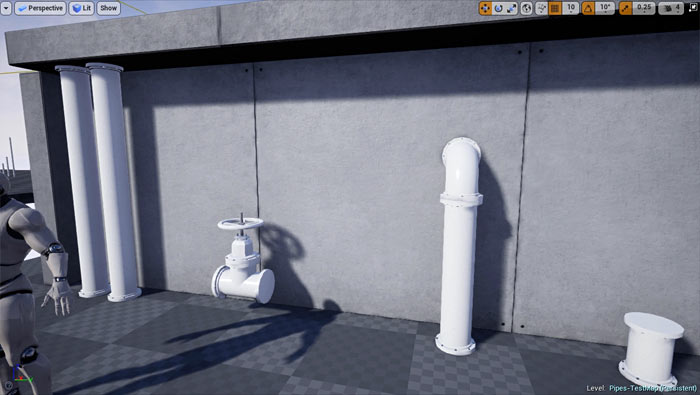 I began using just a handful of these meshes together and was able to create something interesting. I spent about an hour creating this scene, using small and medium size pipes and corridor assets. 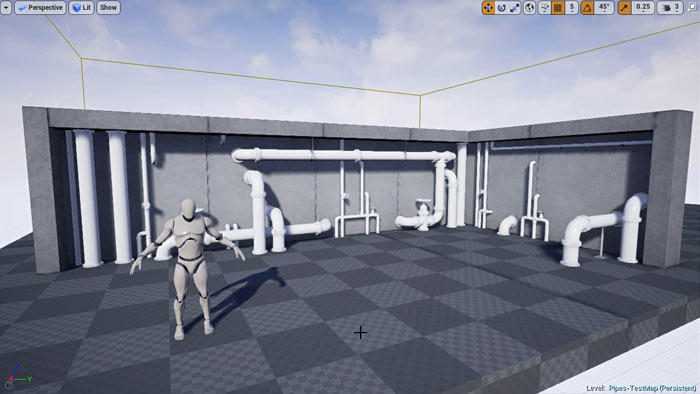 Adjusting the Mesh Sizes to Make Them Fit

Not all modular pipes will fit within a specific space you are creating. Sometimes you'll need to change scale of certain meshes along an axis (X, Y or Z) to make them fit. In my case I had to change scale along Z axis.

I had to do this within a few places for the pipes and for the columns.

Also make sure you are changing scale so the pipes are divisible by 5. This way they remain on the grid and modular.

Great technique to duplicating a set of pipes that you've already put together is to group them first then duplicate.

I created this network: 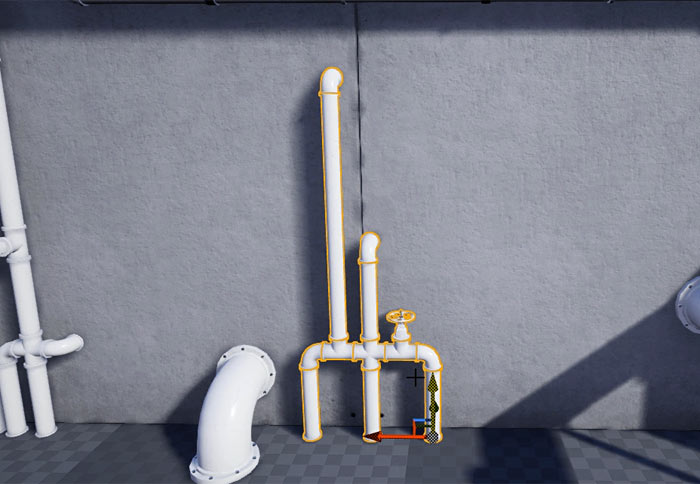 I selected all the pipes and pressed Ctrl + G to group them. The selected meshes are now grouped. I can duplicate them and move them without having to reselect one-by-one.

First, I placed pipes into the scene just to get something going without any consideration on aesthetics. The scene quickly became cluttered.

Then I went through the scene and focused on balance and composition. This means removing some pipes, updating others and performing a clean up to achieve better compositional balance.

Here is the result:

I added a door frame, door and exit sign: 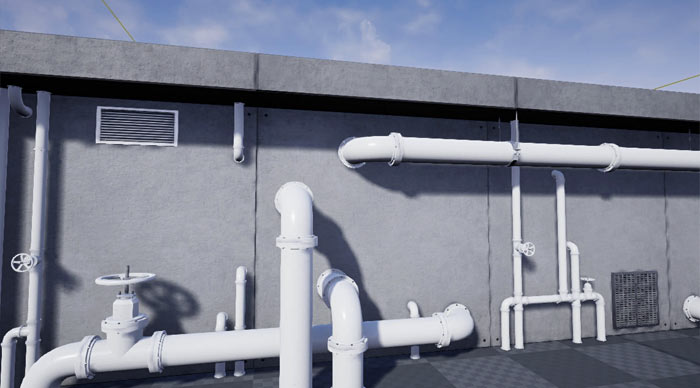 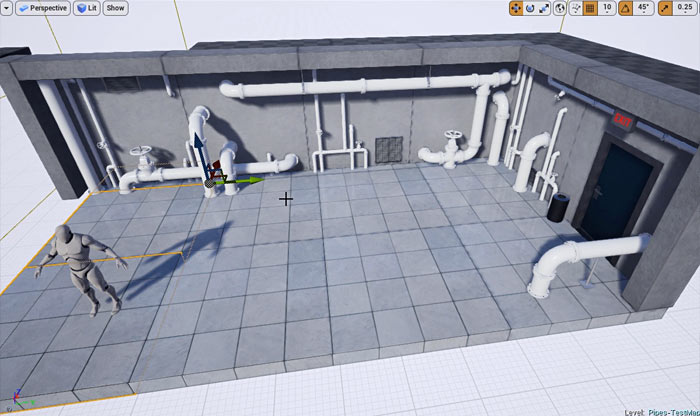 Using a Material Instance, I replaced color on both small and medium pipes.

Medium pipes are orange and small pipes are gray: 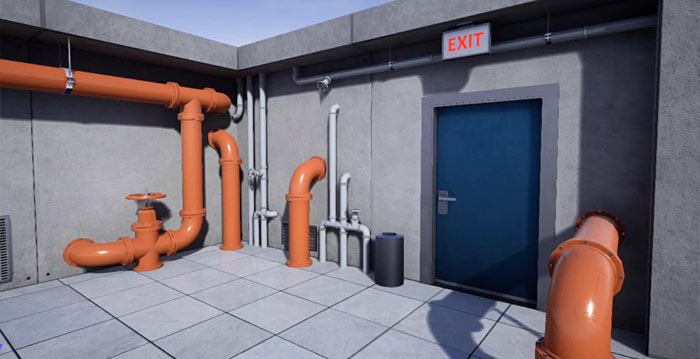 One trick to apply the Material Instance to all the pipes at once is to select them all.

Since I have them grouped, this part was quick. Then drop Material Instance into Material slot inside the Details panel.

Decals were added for more dirt and grime. They were placed on the walls and on the floor: 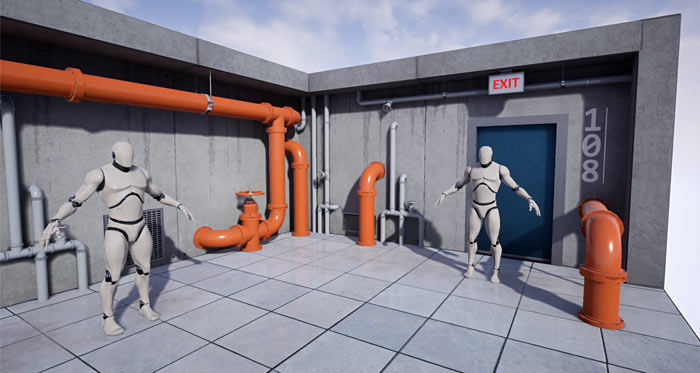 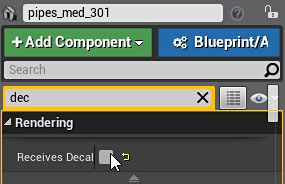 Last step is to bake lights on Production.

Second part of the tutorial is here: UE4 How to Make Modular Pipes Work in "The Corridor Project"

Get "Modular Pipes Project" and "The Corridor Project"

Both, "Modular Pipes Project" and "The Corridor Project" are available right now as tutorials and all the project files you saw in this tutorial come with it. Download them now, learn and create... 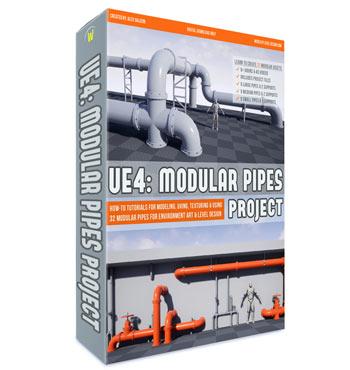 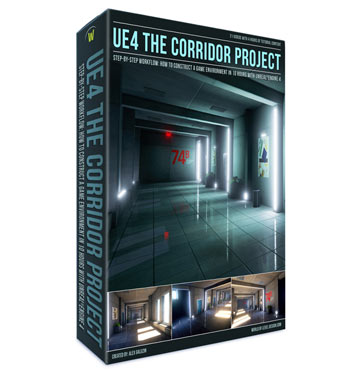 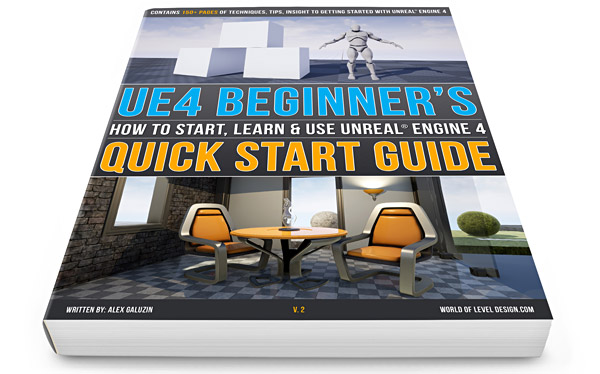 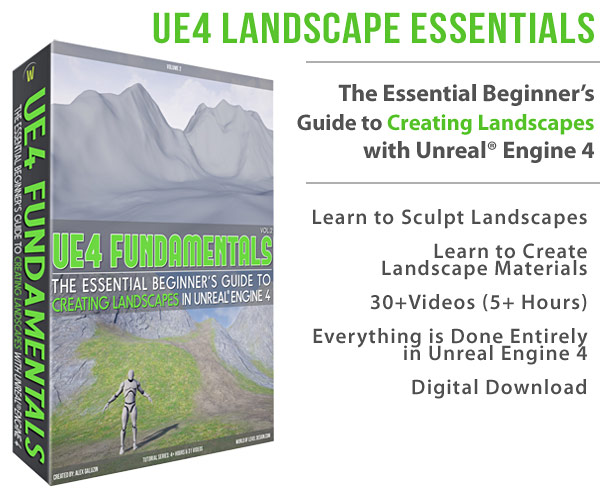 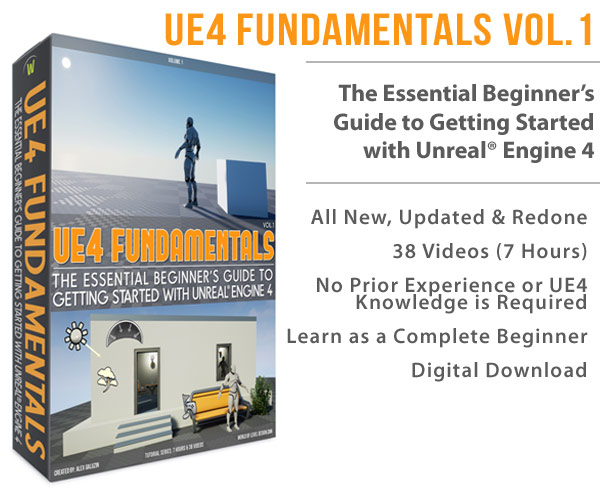 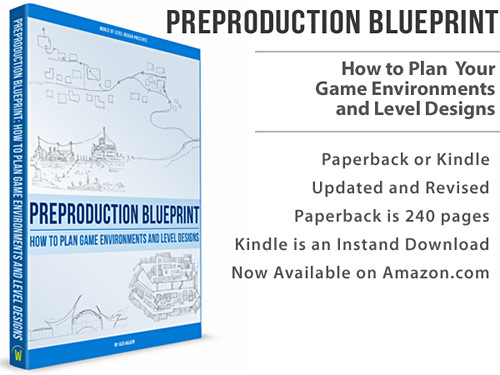 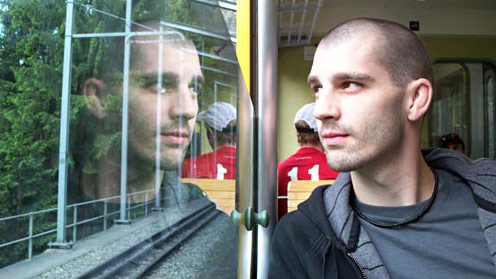 All content on this website is copyrighted ©2008-2021 World of Level Design LLC by Alex Galuzin. All rights reserved.
Duplication and distribution is illegal and strictly prohibited.